The Bitcoin Cash (BCH) network experienced over 2.1 million transactions on September 1 as a result of the recently launched BCH stress test, according to data from BitInfoCharts.

The “stress test” is a community driven test of the BCH mainnet and its services, according to the BCH stress test website. The test aims to process “millions of minimum fee transactions” within 24 hours in order to prove the Bitcoin Cash blockchain’s capacity and scalability, as well as to provide data for developers and business running their services and decentralized applications (DApps) on the BCH network.

The stress test was conducted on September 1, ten weeks before the reportedly scheduled November upgrade, and is “hopefully” set to take place on an annual basis.

As a result of the Bitcoin Cash stress test, the share of Bitcoin Cash transactions amounted to 63 percent of all crypto transactions for the past 24 hours to press time, according to BitInfoCharts. The second currency in terms of number of transactions per day is Ethereum (ETH). 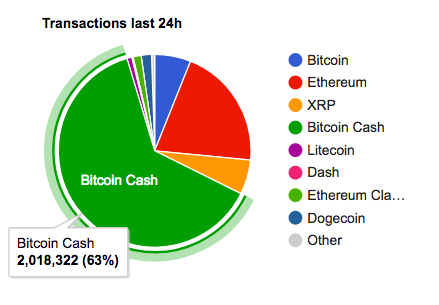 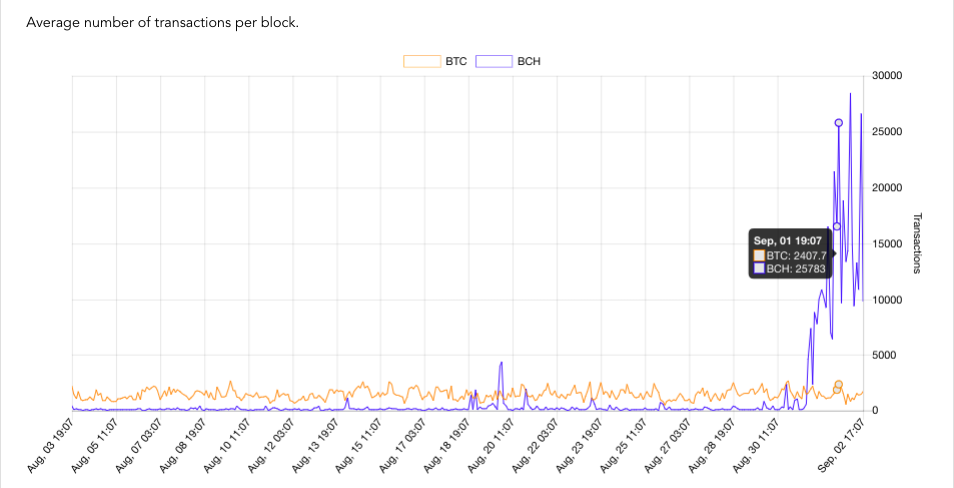 According to BitInfoCharts, Bitcoin Cash average transactions fees have not increased, actually seeing a small decline from $0.002 to $0.0017.

Software Engineer Jameson Lopp commented in a tweet that the Bitcoin Cash stress test “has succeeded in breaking various transaction and mempool visualizers.”

In mid-August, Cointelegraph reported that there are now fewer holders of Bitcoin Cash, as well as a decreased use of the cryptocurrency in commerce. According to a study by Chainanalysis, BCH payments dropped to $3.7 million in May from $10.5 million in March.

On Friday, Cointelegraph reported that Initial Coin Offering (ICO) advisory firm Satis Group forecast in a study that Bitcoin Cash will drop to as low as $268, as it attempts to “inherit brand recognition” while providing “minimal technological advantage to incumbents.” The same report has stated that Bitcoin’s price could potentially soar to $98,000 in the next five years.

As Cointelegraph reported earlier today, Bitcoin Cash’s price has shot up following the stress test, as the coin sees the biggest gains over the past 24 hours among top 20 cryptocurrencies by market cap. At press time, Bitcoin Cash is trading at $635, up around 3.1 percent over a 24 hour period and 21.5 percent over the the week, according to CoinMarketCap.

12 Thoughts to “2.1 Million Transactions Cause No Surge in Fees”