Since May 2014, Thailand has been under the control of a military dictatorship. And given that the coup, led by the Royal Thai Armed Forces, brought internet censorship, a suspension of the Kingdom’s constitution, and a disbanding of its senate, casual observers would be forgiven for supposing that the Southeast Asian country is now possibly one of the least favorable places on Earth for the use and development of technological innovations.

However, while Thailand’s earlier history with crypto might confirm this assumption, more recent months have provided a case study in how blockchain and cryptocurrencies can find a place even within rigidly authoritarian political structures. Slowly but surely, the military junta revealed and acted on plans to legalize ICOs, to authorize crypto-exchanges, and also to enforce regulation that legitimizes crypto. And this all comes at a time when the same junta has re-permitted political activity in anticipation of next year’s general election, raising the very strong possibility that crypto will play an even bigger role in Thailand’s economic and political life as the nation continues forging its path towards modest liberalization.

No crypto for banks

Much can happen in crypto in a single year, and nothing proves this more than the progress Thailand has made in fostering a crypto-friendly environment. Having previously taken an ambivalent stance towards cryptocurrencies, the central Bank of Thailand issued an order to the country’s banks in February, requesting that they stop directly dealing with any company that trades or works with cryptocurrencies, pending the passage of future legislation.

A few days later, the state-owned Krungthai Bank followed suit and also announced that it was ceasing all business with TDAX, after its chairman – Somchai Sujjapongse, a permanent secretary at the Finance Ministry – gave an official order to do so. Together with Bangkok Bank’s previous action, this struck an ominous note for the cryptocurrency industry in Thailand, particularly when TDAX decided to cease new ICO registrations, for fear that Initial Coin Offerings (ICOs) were responsible, more than anything else, for turning the Thai government against crypto. 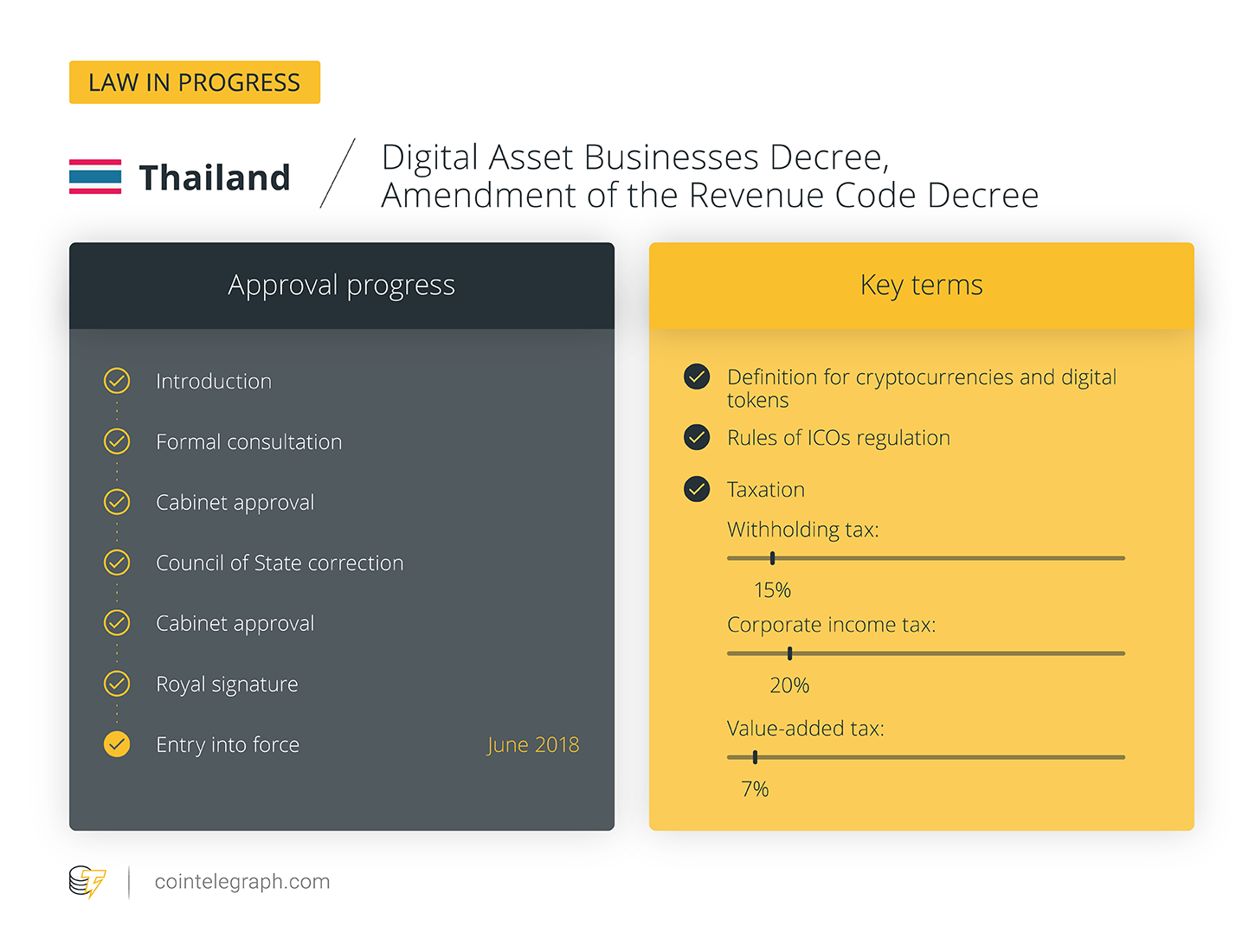 Too big to ignore

Considering critical remarks made at the time by Sujjapongse about Bitcoin, few would have imagined a particularly rosy future for cryptocurrencies in Thailand. He said in February:

“Allowing Bitcoin transactions to be made without warnings and direction from regulators is not acceptable.”

Nonetheless, his allusion to regulators revealed that Thailand’s emerging approach to crypto wouldn’t involve banning it outright, but rather ensuring that it operated within a context in which consumers and the wider Thai economy were protected.

Indeed, a month later, the government published its much-anticipated first draft of regulations for digital assets. These were cautious, yet in outlining a capital gains tax of 15 percent and requiring all crypto-platforms to register with the relevant authorities, they were clearly aimed at making crypto an integral part of Thailand’s economic landscape. This was confirmed in May, when the regulatory framework came into force, requiring token traders and sellers to register with the Thai Security Exchange Commission (SEC) within 90 days, or face fines of at least 500,000 baht (around $15,700) and/or maximum jail terms of two years.

While the Thai military government unsurprisingly had an anti-democratic, hardline reputation around this point, there was arguably never any question of cryptocurrency being banned or severely curtailed in the country. That’s because crypto was already far too popular for the government to do anything meaningful to restrict it.

For example, in the week ending February 17 (during which the Bank of Thailand issued its circular), 113 Bitcoins were traded for Thai baht (THB) on the Local Bitcoins exchange. By comparison, only 20 Bitcoins were traded for Turkish lira on the same exchange in the same week, while only 12 were traded for Argentine pesos. According to the International Monetary Fund, both of these countries have economies bigger than Thailand’s, sitting respectively at 17th and 21st on the global table, compared to 26th for Thailand.

In conjunction with the fact that both Turkey and Argentina have been suffering from serious inflation this year, such figures offer a vivid indication of how big crypto is in Thailand, and how foolish the Thai government would have been to attempt a full crackdown. And considering that the Thai economy actually contracted following the 2014 coup, it’s clear that crypto is far too big an opportunity for any Thai government to neglect. This is especially true when fears surrounding economic growth persisted to the beginning of this year, as Thailand failed to match GDP increases enjoyed by neighboring Vietnam and the Philippines.

It’s therefore no surprise that, more recently, the government has increasingly strived to nurture Thai crypto. Not only did the SEC implement regulations in July that permit ICOs (so long as they’re based in Thailand), but it confirmed a month later that it had already authorized seven companies – including TDAX – to operate as exchanges and/or carry out crypto-related business in the country.

At the same time, it also announced that it was receiving a large number of applications for licensing from other Thai startups and firms, which were interested in either holding an ICO or opening a digital asset exchange. This came as the Bank of Thailand permitted the country’s banks to open subsidiaries for the express purpose of handling and working with cryptocurrencies, something which theoretically “ring-fences” them and the Thai economy from any risk of instability.

In parallel with the development of this new, semi-permissive legislative environment, the Thai government has itself also been looking towards cryptocurrencies and blockchain.

Back in June, the Bank of Thailand’s governor, Veerathai Santiprabhob, revealed that the central bank was looking into the possibility of issuing its own cryptocurrency for the purposes of enabling faster interbank settlements.

“Like other central banks, our goal is not to immediately bring CBDC [central bank-issued digital currency] into use, but rather to explore its potential and implications for back office operations.”

In August the bank announced that it would indeed be building its own CBDC, using R3‘s Corda platform.

Encouragingly for crypto, Santiprabhob said in a November interview with Thai media that he expects that the country and its financial institutions will need three to five years to make the “switch” to digital currencies. Half a decade might seem like a long time for some impatient investors, but given that such a statement hints at the Bank of Thailand’s long-term intentions to adopt crypto at scale, it provides positive confirmation that cryptocurrencies will have a permanent home in the Asian country.

The central bank hasn’t been the only part of the Thai establishment to explore crypto and blockchain in recent months. In late July, the Thai Bond Market Association said that it would begin using a private blockchain to register bonds by the end of the year, and that it’s looking into introducing its own utility coins to support the system. While in October, the Ministry of Commerce detailed plans to trial decentralized ledger technology in the areas of copyright management, agriculture, and trade finance.

There is, then, a big opening up in Thailand towards crypto and the economic opportunities it provides. However, even if there is now a process of partial liberalization underway in the military-controlled nation, the crypto industry should be under no illusion that the Thai government is still anything but highly cautious when it comes to cryptocurrencies.

Back in October, the Thai SEC issued warnings about nine unregistered tokens and ICOs. This was ostensibly to highlight the financial risk they might carry for the public, although the warning also offered some indication of just how jealously it and the Thai government watch for anything that might undermine their power and oversight.

Similarly, the Deputy Prime Minister, Wissanu Krea-ngam, gave a speech at the beginning of November in which he said the government wants to do more to regulate cryptocurrencies and to prevent them from being misused by terrorists, criminals, and money launderers.

Given that Thailand has the 13th highest number of terrorist incidents in the world (according to the Global Terrorism Database), this is a reasonable aim, but there’s a worry that it may invite mission creep, as the government increasingly curbs legitimate crypto-related activity in a bid to curb illegitimate activity.

Thailand began using the death penalty again this year after a nine-year moratorium, while the new king – Bhumibol Adulyadej – has taken steps to consolidate his power in the wake of his father’s death. Such features of national life arguably create an unfavorable climate for crypto, which is often sold as a means of distributing and weakening central power, rather than as a way of bolstering it. However, plans to hold a general election next year – as well as the Thai government’s slow-and-steady approach to legislation – do at least suggest that there is an increasingly assured place for the crypto community to do business in Thailand, so long as they stick obediently to the rules.