Former U.S. Congressman Ron Paul has asked Twitter users Nov. 15 how they would prefer to receive $10,000 if they had to keep it in this form for a decade, with the majority picking Bitcoin (BTC) .

Of the respondents, 50 percent answered that they would prefer to receive their $10,000 in Bitcoin, the second most chosen asset was gold (37 percent), the third U.S. 10 year treasury bonds (11 percent), and the last was the U.S. dollar at only 2 percent.

Bitcoin’s price had recently been stable for a long time, until it had lost over 10 percent in 24 hours the day before the survey started. An analyst at Fundstrat, an advisory firm, has predicted that Bitcoin will take “weeks, if not months” to recover, and analysts at Bloomberg Intelligence say that the coin’s price could be on its way to $1,500.

Former Texas representative Paul already conducted an identical survey on Dec. 5 2017, with relatively similar results: the U.S. dollars scored the same, and Bitcoin received just 4% more than in the most recent poll.

A similar but more cryptocurrency-centric survey has been conducted on Twitter by Ran NeuNer — founder and CEO of crypto investment and advisory business Onchain Capital. In his version of the poll, the possible answers to the same question were Bitcoin, Ripple (XRP), Bitcoin Cash Satoshi’s Vision, and American Airline Miles. 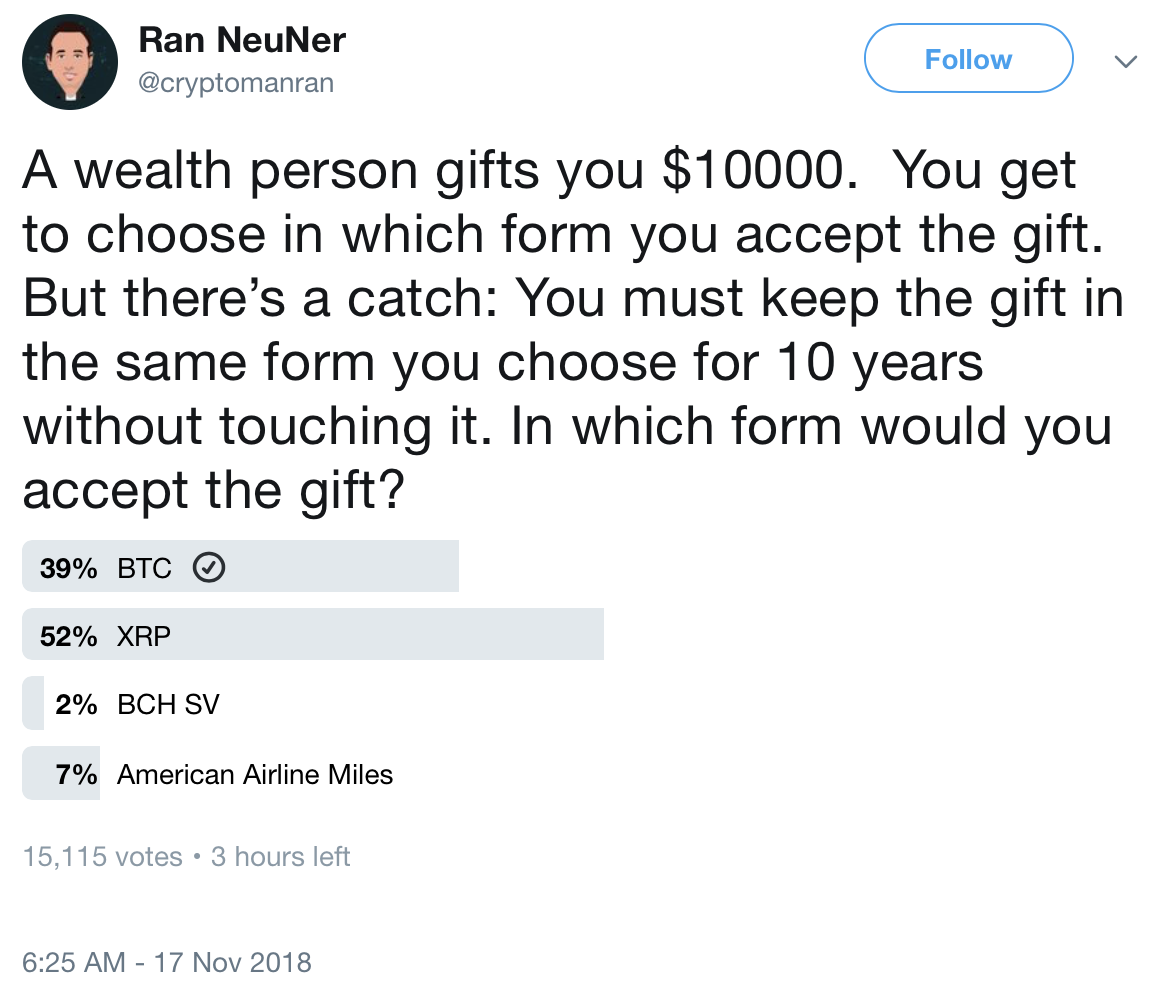 There are still three hours left in NeuNer’s poll by press time, and most of the respondents (52 percent) have answered that they would prefer to hold XRP. The second most popular answer is Bitcoin (39 percent), the third is American Airline Miles (7 percent), and the least popular is Bitcoin Cash Satoshi’s Vision (2 percent).

At press time, XRP has increased by 6.97 percent in the last 24 hours and has again overtaken Ethereum’s (ETH) market cap to take the number two spot on CoinMarketCap.