The smarts contracts giant continues consolidating within a descending parallel channel that began developing at the beginning of the month. Since then, each time Ethereum rises to the upper boundary of the channel, it pulls down to hit the lower boundary, and from this point, it bounces back up again.

The recent bearish impulse that Ether went through allowed it to reach the bottom of the channel, which prevented it from a steeper decline like it has done it over the past months. If this support level continues to hold, it is reasonable to expect a rebound towards the middle or the upper boundary of the channel.

Such an optimistic outlook is consistent with most recent network activity, which suggests that a significant number of market participants want a piece of Ethereum 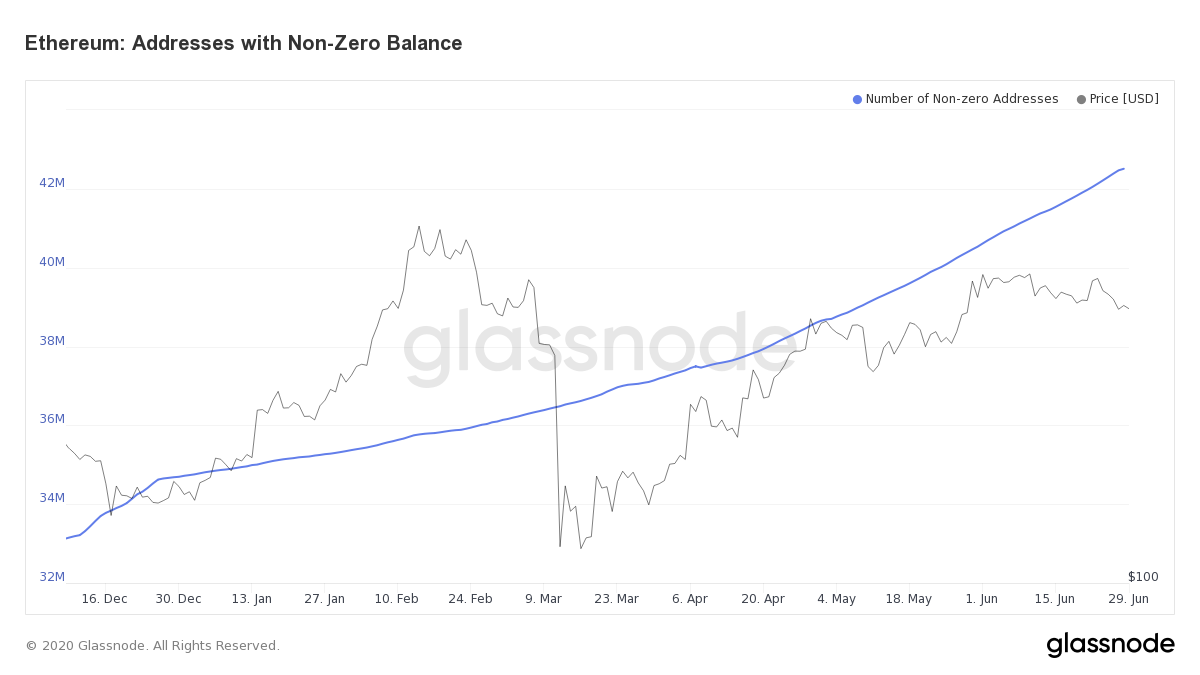 The rising number of Ethereum holders appears to be fueled by the buying spree that miners have gone through. Indeed, the mining pools behind the second-largest cryptocurrency by market cap have collectively increased their balance by 21,000 ETH throughout the 20 days alone.

Spencer Noon, the head of DTC capital, maintains that the increasing buying pressure from miners  comes “after a string of short-term miner selloffs in late May and early June following ETH’s rise above $220.” Now, they seem confident that the current price levels could present sizable opportunities to profit.

“The prolonged periods of miner accumulation can indicate fairly high confidence levels among ETH mining pools in relation to the asset’s short-term performance. As such, it’s particularly notable that the Ethereum miners have decided to sit on their block rewards for almost the entire month of June,” said Noon.

Despite the high levels of interest surrounding Ethereum, IntoTheBlock’s “In/Out of the Money Around Price” (IOMAP) model reveals it sits on top of a weak support level. Roughly 1 million addresses had previously bought 1.6 million ETH between $215 and $221. If this supply barrier fails to hold, Ether could fall to $200 since there is not any significant barrier in-between.

The $200 support level, however, may serve as strong support since 1.24 million addresses had previously purchased 9.6 million ETH. Holders within this price range would likely try to remain profitable in their long positions and may even buy more ETH to avoid potential losses.

It is worth noting that due to the unpredictability of the cryptocurrency market, the bullish outlook presented by the aforementioned parallel channel cannot be taken out of the question. Still, there is a massive supply barrier ahead of Ethereum that may absorb any upside pressure.

The IOMAP cohorts show that for Ether to bounce off towards the middle or upper boundary of the channel it would have to break above the $230-$243 resistance wall. Around these price levels, roughly 2.7 million addresses had previously bought over 15 million ETH.