This week, the EOS blockchain protocol angered decentralization proponents yet another time. Specifically, Starteos, one of EOS’ officially sanctioned Block Producers (BPs), appeared to publically offer its token holders financial rewards in return for their votes.

Starteos’ vote-buying tendencies seem to fall in line with previous scandals centring around EOS: This year, the blockchain protocol reversed previously confirmed transactions and started an internal investigation after Huobi, its other BP, was accused of running a corruption scheme, among other things.

Brief introduction to EOS and its key features

EOS.io is a blockchain-powered smart contracts protocol for the development, hosting and execution of decentralized applications (DApps). It was launched in June 2018 as open-source software, while the first testnets and the original white paper emerged earlier in 2017. The platform was developed by block.one, a startup registered in the Cayman Islands and lead by Daniel Larimer and Brendan Blumer.

EOS has raised the most funds during its Initial Coin Offering (ICO): The startup managed to gather around $4.1 billion worth of investments, after fundraising for nearly a year. That number remains unmatched to date.

The protocol is supported by the native cryptocurrency, EOS — currently the sixth largest crypto by total market cap. Those tokens can be staked for using network resources either for personal use or leased out for developer-use — basically, EOS.io attempts to represent a decentralized alternative to cloud hosting services.

EOS employs a consensus model called delegated proof-of-stake (DPoS). Essentially, that means that its investors are rewarded with voting power and decide who gets to mine the EOS blockchain.

Hence, the EOS ecosystem rests upon at least two major entities: the EOS Core Arbitration Forum (ECAF) — effectively its ‘judicial branch’ — and BPs, who produce blocks on the EOS blockchain — just like miners do within the Bitcoin (BTC) blockchain.

BPs earn EOS tokens produced by inflation — according to some estimations, top EOS BPs obtain around 1,000 tokens per day. They are elected through the constant voting process, and their number is capped at 21 — consequently, the top is fluid by design, and BP candidates who earn enough votes can replace the BPs in power at any minute.

Starteos is a startup based in Chengdu, China. According to its website, the company “entered blockchain industry [sic]” in 2013.  This year, Starteos has reportedly issued at least two products: the self-titled digital wallet and ‘Memory Box,’ a “one-tap access” cold-storage wallet. Currently, Starteos is the fourth-largest BP, as per eosnetworkmonitor data, meaning that it gets a large portion of the BP revenue.

On Nov. 27, Starteos published a Medium post titled “We Gonna Share BP Proceeds With You — This Is the Way We Warm You Up in This ‘Winter’!” In it, the startup team claimed that “after delegating Starteos.io as proxy, you could get continuous and stable EOS revenue.”

“The ‘winter’ of cryptocurrencies has come. How much faith do you left to have [sic]?” the post reads, continuing:

“Now, Starteos is still gonna stay with YOU, our most important and best friends! And we [are] gonna share the proceeds with you and make [it] through the difficulties together.”

Further, the Chinese startup outlines an instruction on how to claim the benefits: After selecting Starteos as a proxy, users can pick “stable income,” “mining” revenue mode or the “random revenue” mode, where they play “Lucky Fruit Slots Machine” with game tokens to get “EOS revenue.”

“EOS is fundamentally different from other governments and blockchain communities in that its community wishes to operate at the highest possible ethical standard of voluntary consent and non-violence.”

“No Member shall offer nor accept anything of value in exchange for a vote of any type, nor shall any Member unduly influence the vote of another.”

Expectedly, the crypto community, which traditionally values decentralization, was not happy about an EOS BP openly buying votes.

On Nov. 8, weeks before Starteos published a Medium post explicitly describing how users can claim some of the revenue, EOS investor Maple Leaf Capital pointed out that Starteos was launching a slot machine DApp, where users allegedly could set Starteos as a voting proxy to obtain in-game tokens. According to the original article describing the DApp, the rewards to the gamers would come directly from games.eos’s BP reward, which, in turn, is owned by Starteos.

“It may not be bad-intentioned, but it looks awfully close to transferring block-producing reward value to its voters, with a thin veil of gamification & probability attached to it. This could set a bad precedence and deserves some debate.”

Later, on Nov. 29, the investor announced it would discontinue voting for Starteos, arguing that “swapping block reward for votes in gaming form is detrimental to the long-term economic value for the EOS.”

Steemit user theawakenment stresses that games.eos is holding a paid position, being ranked at the 66th position (game.eos has since moved up to the 50th place). He wrote an open letter to EOS investors after contacting the Starteos administration and failing to receive a response from them, stating:

“If other BPs copy what Starteos is doing and launch a second or third BP themselves, we will soon end up with the large BPs being owned and run by the same handful of owners.”

After the letter was published, a Starteos representative reportedly did message him:

“[They] admitted to creating the games.eos account and admitted to ‘collaborating’ with games.eos, but they told me they had different owners, which does not match up with what they have stated on their website.”

Australia-based crypto persona Crypto Tim, who covers mostly EOS-related news, published a video titled “EOS BP Starteos Are Vote Buying,” which gathered some commentary from the community on Reddit and YouTube. On Twitter, he called for Starteos “to be removed as a Block Producer.”

Some of the BPs have expressed their views on vote buying as well, albeit without directly mentioning Starteos. On Nov. 27, EOS New York, which is currently the eighth largest BP, wrote that “the EOS constitution is simply not good enough and we deserve a clear document that outlines our basic system of governance,” and then shared their proposal. After being asked in the comment section whether the document features any restrictions on vote buying, EOS New York stated, “There are not. We have it now and we have BPs violating it. No point.”

Moreover, Starteos has reportedly been unvoted by at least one BP, Bulgaria-based EOS Titan. Nevertheless, Starteos continues to hold the third/fourth positions in the BP ranking, which suggests that it is still largely supported by other BPs. The list of Starteos supporters can be monitored via a resource powered by EOS Titan — according to their data, Starteos’ largest ally is Huobi, which has been previously accused of running a mutual voting rig.

The EOS vote-buying scandal has correlated with the token’s massive price drop. While it followed an overall bearish market trend, the losses EOS/USD experienced were more significant comparing to other top coins. EOS is trading at $2.36 as of press time, down around 25 percent over the past seven days. 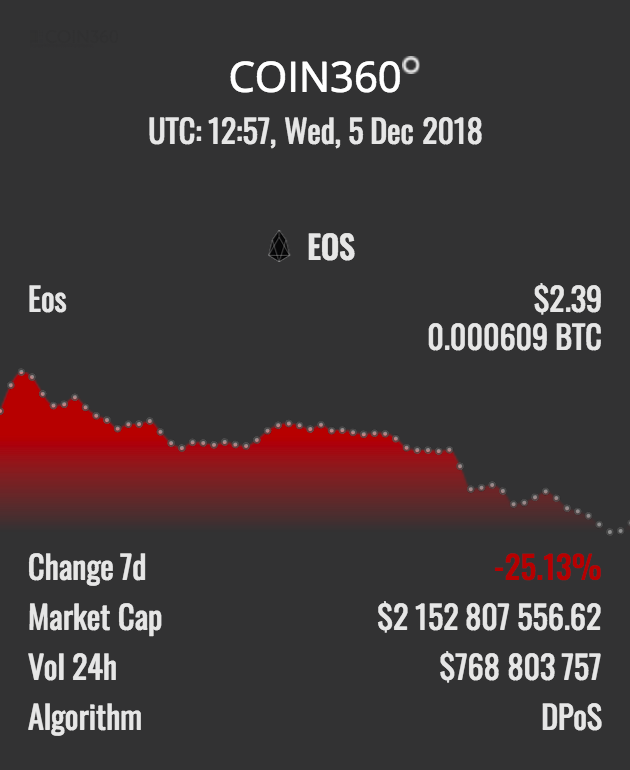 Previous signs of centralization in the EOS protocol

EOS’ model of governance has attracted controversy before: Just a few weeks ago, in November, a screenshot showing an ECAF moderator reversing transactions — which had already been confirmed — was posted on Reddit and gathered hundreds of comments.

According to Reddit user u/auti9003, a dispute allegedly involving a phished EOS account was referred to one of the platform’s “arbitrators” Ben Gates, who decided to reverse transactions that happened without the owner’s permission. This, the user noted, involved undoing transactions which had already received network confirmations.

That move outraged decentralization maximalists, as Reddit responses mostly claimed that EOS had failed to prove its use case versus other, more traditional centralized structures.

“Why would anyone use this over a bank account and traditional legal system?” the most popular comment read, adding:

“These guys raised [$4 billion] to recreate the legal system using a token that is neither censorship-resistant, nor immutable.”

Essentially, an alleged leaked Huobi spreadsheet suggested that main EOS nodes were involved in mutual voting along with payoffs to remain in power of the EOS blockchain and keep their profits. Interestingly, Starteos was also listed in the document.

Soon after, Block.one — the developer of EOS — published a statement, saying it was “aware of some unverified claims regarding irregular block producer voting, and the subsequent denials of those claims.” Nevertheless, there was no further update on the matter, while Huobi remains EOS’ top BP as of press time.

Further, in June, another scandal occurred when EOS BPs overrode an ECAF decision and froze seven accounts associated with phishing scams after the arbitration body failed to promptly come up with a response. The ECAF later retroactively ordered the accounts frozen, but the BP conference call-based decision caused some to question EOS’ decentralized system, and to label the move as “power abuse.”

Less than a week after, another ECAF order to stop processing transactions involving 27 more addresses surfaced. Interestingly, it lacked any explanation for blocking the addresses, promising to do so on a later date.

That attracted another round of harsh criticism from the crypto crowd, and, after an apparent fake ECAF order began to circulate on social media several days later, some BPs — notably EOS New York — announced that they would suspend execution of any such orders, as they couldn’t tell if they were legitimate. Yet again, the ECAF and BPs struggled to coordinate their action, and, as a result, another important decision on EOS blockchain was handled by centralized entities.

On Nov. 1, more criticism of EOS’ governance model arrived, as blockchain testing company Whiteblock published results of “the first independent benchmark testing of the EOS software.” Essentially, the investigation came to several conclusions about EOS, the most bold of which was that “EOS is not a blockchain,” but “rather a distributed, homogeneous database management system” because its transactions were reportedly “not cryptographically validated.”

Additionally, the research results showed inaccuracies in performance claims. In July, EOS CTO Daniel Larimer tweeted that EOS was performing 2,351 transactions per second (TPS) — Ethereum, for comparison, can process around 15. The Whiteblock report, however, showed that with “real-world conditions” of round-trip latency and 0.01 percent packet loss, EOS performance was below 50 TPS, “putting the system in close proximity to the performance that exists in Ethereum.” The investigation concluded that “the foundation of the EOS system is built on a flawed model that is not truly decentralized.”

Similarly, a report published by Hong Kong-based peer-to-peer cryptocurrency exchange BitMex in late November suggested that EOS resembled a “distributed database system” rather than a blockchain-powered network. The document is no longer available for unknown reasons, but has been covered by various media outlets before going offline.

Still, EOS’ Daniel Larimer has previously confirmed that his company does not aim to be decentralized. In an interview with YouTube blog “Colin Talks Crypto,” which aired on Oct. 3, Larimer clarified his vision:

Cointelegraph has reached out to various Block.one representatives as well as Starteos for further comment, but none of them have replied to date.