A recent study by blockchain-oriented research firm Clovr found that cryptocurrency coverage in the mainstream media spikes when the market drops off. The analysis tracked the correlation between coverage on crypto values over the past five years and the sentiments of published materials.

In the course of its research, Clovr surveyed 48 mainstream U.S.-based and international media outlets for pieces covering cryptocurrency from Jan.1, 2013, to July 31, 2018. All articles were analyzed using sentiment analysis tool Valence Aware Dictionary and sEntiment Reasoner (VADER) and the Natural Language Toolkit (NLTK) library in Python. The analysis included the full text of 7,527 online news articles.

In the last weeks of 2017 crypto coverage in the media spiked following a sharp drop-off in cryptocurrency, which was attributed to a confluence of factors such as strong performance of altcoins, and Bitcoin (BTC) holders selling off their coins to pay for holiday purchases. The same trend was reported in May and June 2018, when a further drop in crypto values was followed by a temporary increase in articles. The study further reads:

“As recently as 2016, positive articles far exceeded negative ones, both in terms of volume and intensity. As coverage surged in mid-2017, however, articles expressing negative sentiment grew more common. This trend was fueled in part to grim prognostications by the likes of Warren Buffett and Mark Cuban, who guessed that ‘a bubble’ was underway.” 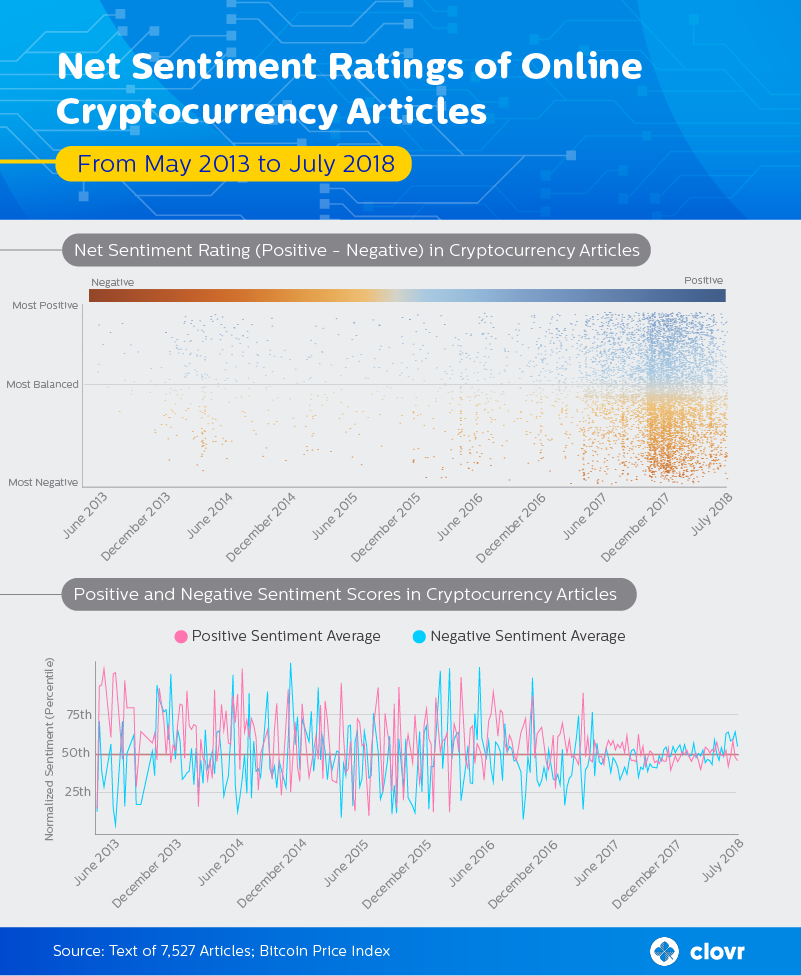 As for news sites that covered digital currency most often, Clovr notes Forbes and Business Insider, where “a combined 1,335 articles from these two outlets alone were more positive than the overall median sentiment of the sampled articles, while only 413 of their articles fell on the negative side.”

As previously reported, BTC use for commercial payments reduced significantly this year, according to a study by Chainalysis. Although Chainalysis recognizes a growing stability of BTC, the value of Bitcoin payments reportedly slumped from $427 million last December to $96 million in September 2018.