The good thing about Cardano is their regular update which in turn gives a clear picture on the development progress of Byron and Shelly. Days after Michael Person resigned and Paul Schmid given the task of leading the foundation and promoting their peer-reviewed platform and technology, ADA prices have been on a free fall—sinking to new 2018 levels.

Read: Cryptocurrency Prices Hold Steady, Could Be More Losses Ahead

Nevertheless, floors are now visible thanks to a wave of bull pressure that swept the market across on Nov 25. That coupled with Charles Hoskinson AMA where not only did he talk about the technical aspect of Cardano amongst other things but gave a hint of what’s to be expected from the much anticipated Cardano 1.4 update.

Since IOHK leads and is under the oversight of several audit firms for quality purposes and compliance, the update is now under regression testing. Some regressions have been found, Charles said it is not of bid concern.

He went on and said there will be a huge amount of refactoring on the core but a huge development will be this connection between Haskell code and Rust code which will play a huge part in the back end of the newly updated Daedalus wallet.

There has been a market wide recovery and ADA/USD is down 4.5 percent in the last week—which is clearly positive and a much-needed correction of Monday print outs. But, despite this shift of momentum mostly in lower time frames, a top down approach paints a grim picture of the current state of affairs.

As it is, we might as well see ADA sink to new lows by the end of the year thanks to last week’s depreciation that saw a whole bear bar print below the main support line at 6 cents. That’s a clear break-down pattern and as far as our trade plan is concerned, conservative traders have no reason to exit their shorts unless of course there are strong gains rocketing above 6 cents—but trigger and resistance line. This shall confirm the entry of bulls as a retest phase is completed.

However, if this week close below last week’s lows of 3.3 cents, then we might see bear trend continuation. 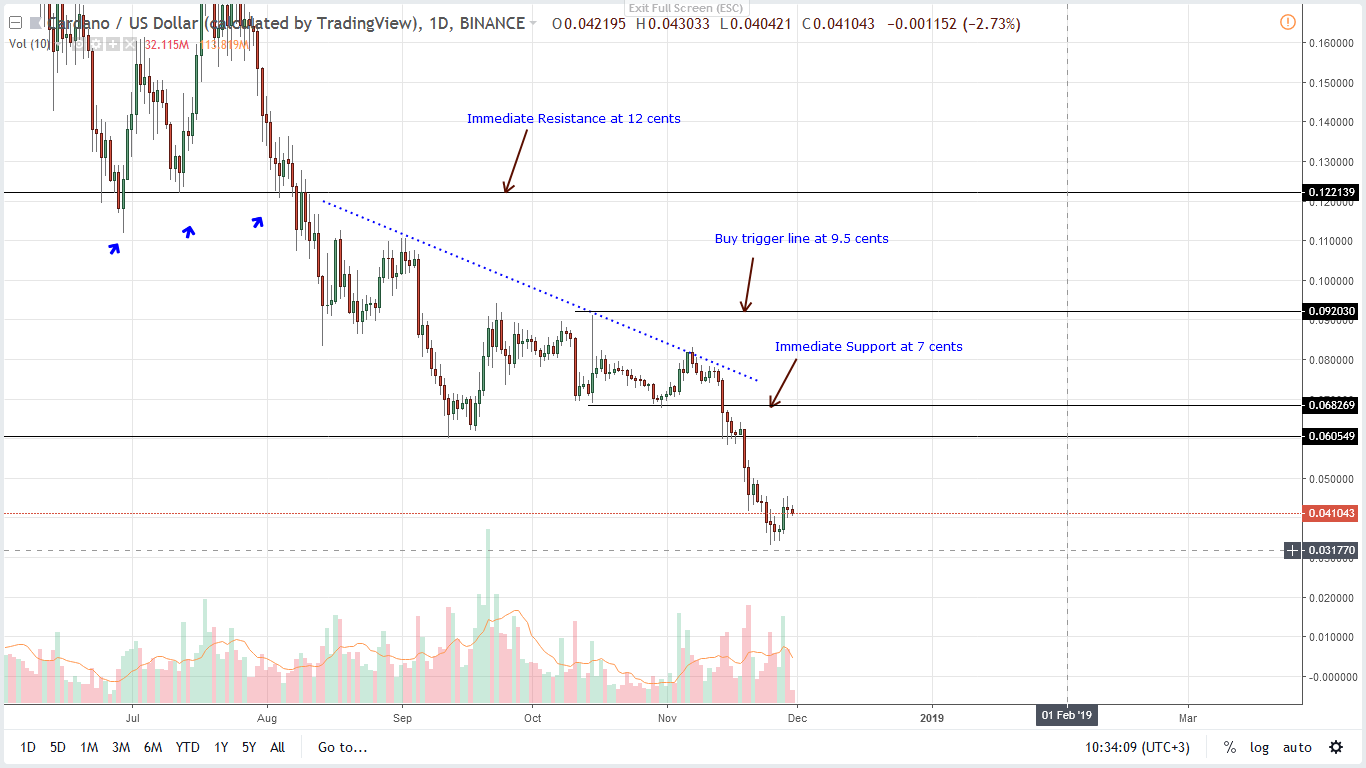 Though market participants are optimistic, expecting prices to snap back to trend above 5 cents and later 6 cents, bears are in control. From candlestick arrangement alone, this is a tall order and before we recommend short-term longs, then there must be a confirmation of the morning star pattern which printed out by Nov 25.

That means bulls must push prices above 5 cents. If not and ADA/USD prices cave in and print below 3.3 cents, then we shall trade as aforementioned and let the bears roll.

7 Thoughts to “Bears in Control ahead of Cardano 1.4 Update”