Tuesday, Nov. 24: Bitcoin (BTC) has failed to hold $4,000 support that it challenged yesterday, while most major cryptocurrencies by market cap have seen losses over the past 24 hours, according to CoinMarketCap.

9 of the top 20 cryptocurrencies are seeing mild gains today, with the ZCash (ZEC) and NEM (XEM) prices increasing by more than 10 percent and 8 percent on the day, respectively. 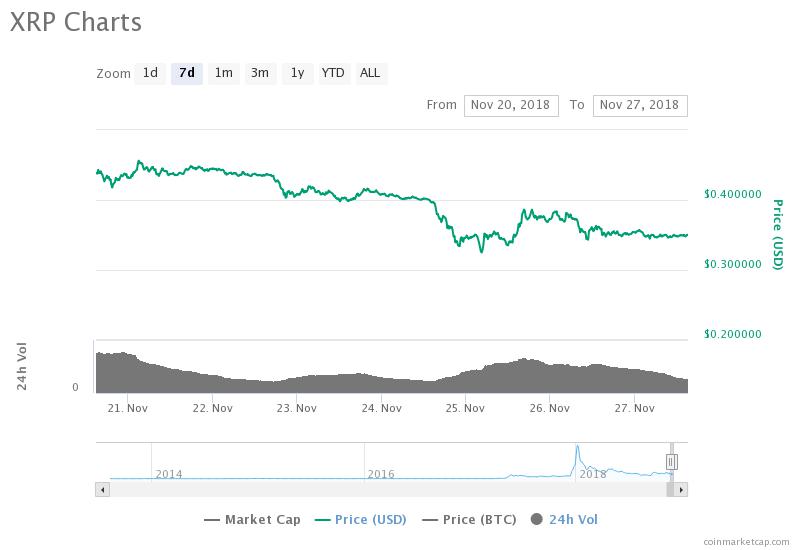 Bitcoin SV, the hard fork of Bitcoin Cash (BCH), is the ninth top cryptocurrency by market cap, with total market capitalization of around $1.7 billion. The forked coin is down almost 10 percent on the day, and is trading at $95.28 at press time.

Total market capitalization is $122 billion at press time, fluctuating around $120 billion throughout the course of the day.

Yesterday, the chairman of the U.S. Securities and Exchange Commission (SEC) Jay Clayton reiterated the commission’s strict stance on Initial Coin Offering (ICO) compliance. In an interview with CNBC, Clayton stressed the need to conduct public token sales in compliance with SEC requirements, claiming that most ICOs should be considered securities.

Crypto investor Anthony Pompliano claimed that Bitcoin would likely drop to 85 percent below its all-time-highs and will stabilize around the $3,000 threshold. While Pompliano said that Bitcoin is the “best performing asset class over the past ten years,” he still claimed that the major cryptocurrency was “overvalued” in December 2017, when Bitcoin hit $20,000.