Bitcoin has tumbled again today as the market continues to see further downward movement shortly after breaking two areas of market support. So far, bitcoin is down 15% on the day — 25% in 1 week:

This drop below support is starting to display hallmarks of market capitulation. After most of the sellers got out of the market earlier this year, bitcoin managed to consolidate sideways for about 9 months in the form of a descending triangle.

Last week, after several tests of support, the bottom finally gave out and sent bitcoin jolting downward through multiple support levels. With little to no relief in sight for the bulls, many early buyers are now finding their investments underwater as the market continues to head down toward its macro 78% Fibonacci retracement values: 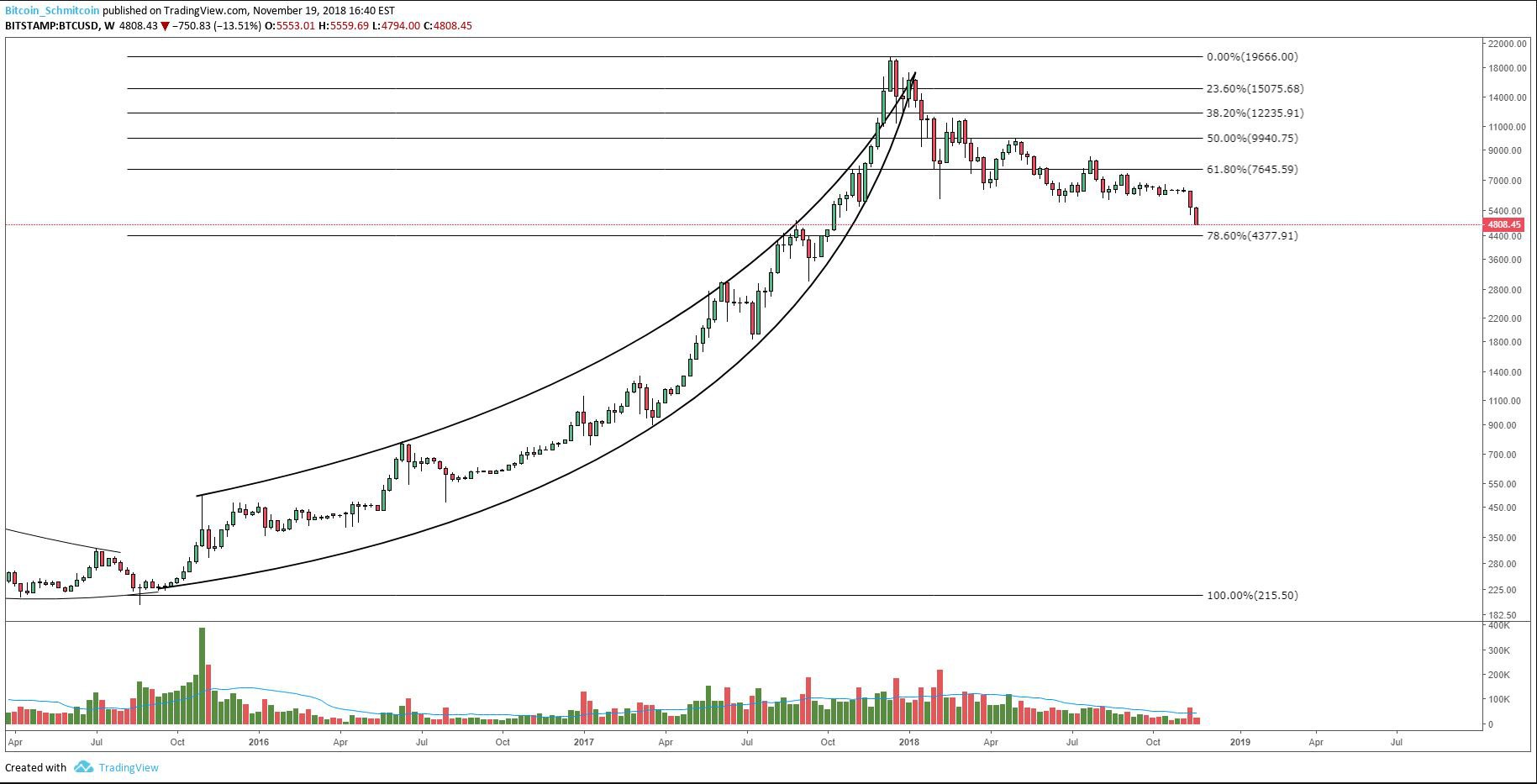 Historically, bitcoin’s previous parabolic run-ups and declines have typically found support around their 78% retracement values. In our case, this coincides at approximately the $4,400 range. However, something that’s a bit concerning regarding the macro trend of this market is the weekly Bollinger bands (bbands): 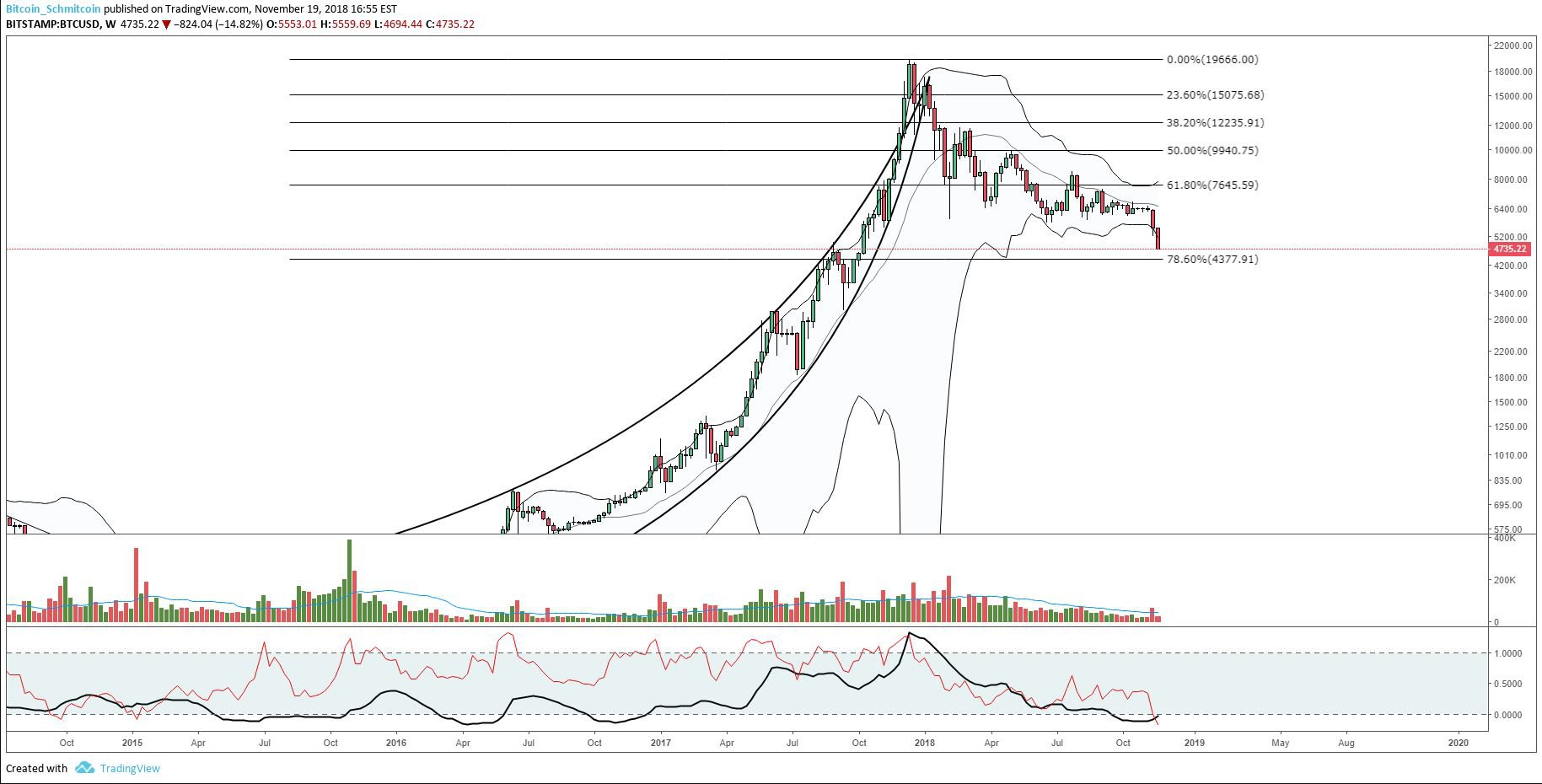 After such a prolonged consolidation, the weekly bbands found themselves very tightly wound. And now, one week after a 25% drop, bitcoin’s weekly bbands are expanding for the first time in over a year.

If you are unfamiliar with Bollinger bands, just think of them as a visualization of market volatility. The tighter the bands, the more consolidated the market is. When the bands begin to expand, their movement is a predicter of increased volatility in the direction of the breakout. While there are some nuanced set-ups involving Bollinger band fakeouts, it is generally considered to be a sign of trend continuation.

A possible scenario that could play out is called a “head fake.” A head fake is basically a breakout in a given direction that quickly “fakes out’ the market and reverses (a fakeout for bitcoin would yield a strong reversal to the upside).

Since this move is on such a macro scale, I wouldn’t entirely rule it out — although, it’s not looking likely at the moment. The most likely situation in our case right now is a downward continuation. Just how far the trend will continue remains to be seen, as the breakout is still fresh in the market.

Looking at Figure 1 and and Figure 2 above, we can see a few areas of support and resistance outlined in blue. So far, we have broken straight through the support with very little pause. As stated previously, the next line of support for bitcoin lies in the $4,400 zone. Given the capitulative nature of this move, it seems likely that the $4,400 zone will hold up nicely as it welcomes a fresh round of buyers. From there, we will have to re-evaluate the market and see how it reacts to the support level.

Trading and investing in digital assets like bitcoin and ether is highly speculative and comes with many risks. This analysis is for informational purposes and should not be considered investment advice. Statements and financial information on Bitcoin Magazine and BTC Media related sites do not necessarily reflect the opinion of BTC Media and should not be construed as an endorsement or recommendation to buy, sell or hold. Past performance is not necessarily indicative of future results.