The crypto markets are somewhat bearish today, August 21, with virtually all of the top twenty coins by market cap seeing losses of 3-6 percent on average, as Coin360 data shows.

Bitcoin (BTC) continues to show relative resilience – the top coin nonetheless continues to trade below the $6,500 price point. Despite a short-lived market recovery August 17, most of this week has seen distinctly lacklustre price performance across the board. The hangover from mid-August’s market crash continues.

Bitcoin (BTC) is seeing virtually no change over the past 24 hours at press time, trading at around $6,400, according to Cointelegraph’s Bitcoin price index. Despite a brief plummet down to $6,260 yesterday at midnight, the coin has pushed back to trade within the $6,400-5000 range for most of today. 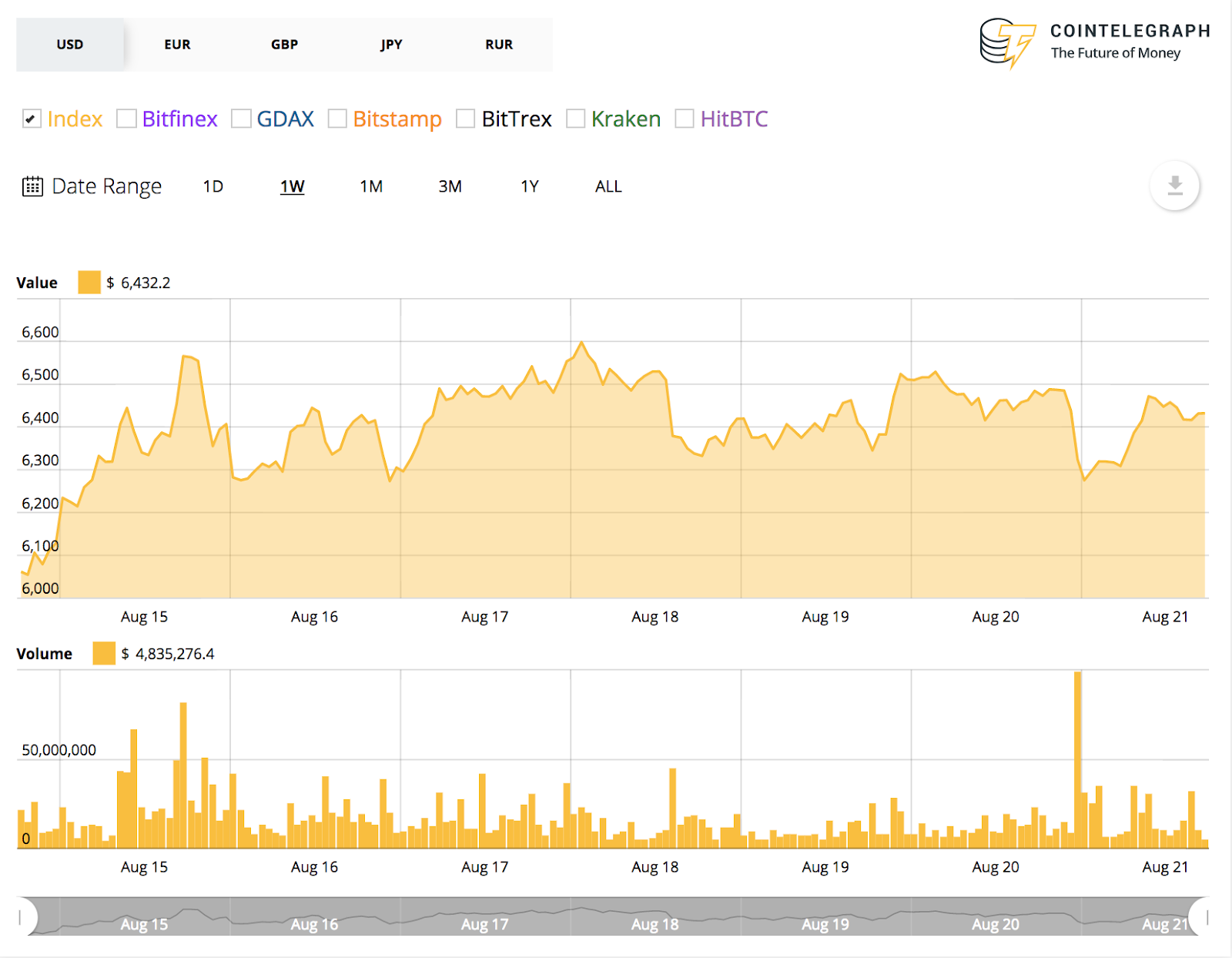 On its weekly chart, Bitcoin has secured a 6.3 percent gain – the asset’s monthly losses remain at a stark 13.4 percent. Nonetheless, as eToro analyst Mati Greenspan suggested in a Tweet this week:

“Bitcoin has been in a steady range for the past 6 months. In this graph, we can see buyers stepping in above $5000 a coin. The 200-day moving average (blue) is providing resistance on the top. A stable price is necessary to maintain a store of value & we’re on the right track.”

Ethereum (ETH) is trading around $277.5 at press time, down around 4 percent on the day. This is the second consecutive day the altcoin has traded well below the $300 mark. 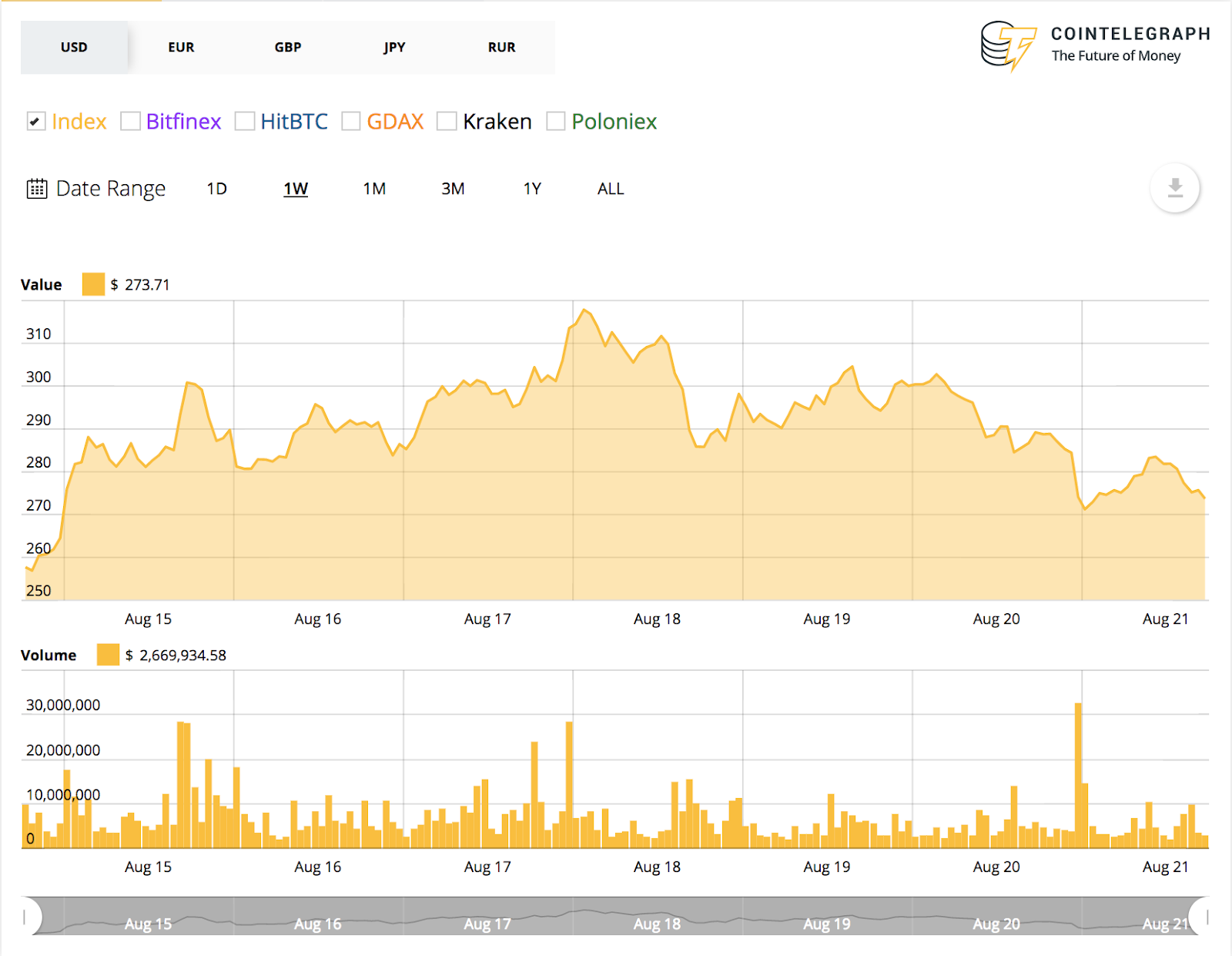 Ethereum is seeing an 8 percent gain on its weekly chart – this being relative to the altcoin’s price point below $260 August 14. On the month, however, Ethereum remains down by a staggering 40 percent.

Since plummeting below $300 August 13, Ethereum continues to trade at levels not seen since early November 2017.

Almost all of the other top twenty coins on CoinMarketCap’s listings are in the red, with the exception of VeChain (VET), ranked 19th, which is up 4 percent on the day.

Bitcoin Cash (BCH), also decisively in the red, is down 3.4 percent and is trading around $528 at press time. Fresh analysis from blockchain intelligence firm Chainanalysis has indicated that BCH use in commerce is on the decline – dropping from $10.5 million in March to $3.7 million in May, which Chainalysis has attributed to “concentrated ownership” styming wider adoption of the asset.

Stellar (XLM), currently trading at $0.22, is faring considerably better than other cryptos, down a scant 0.2 percent and trading sideways most of the week: 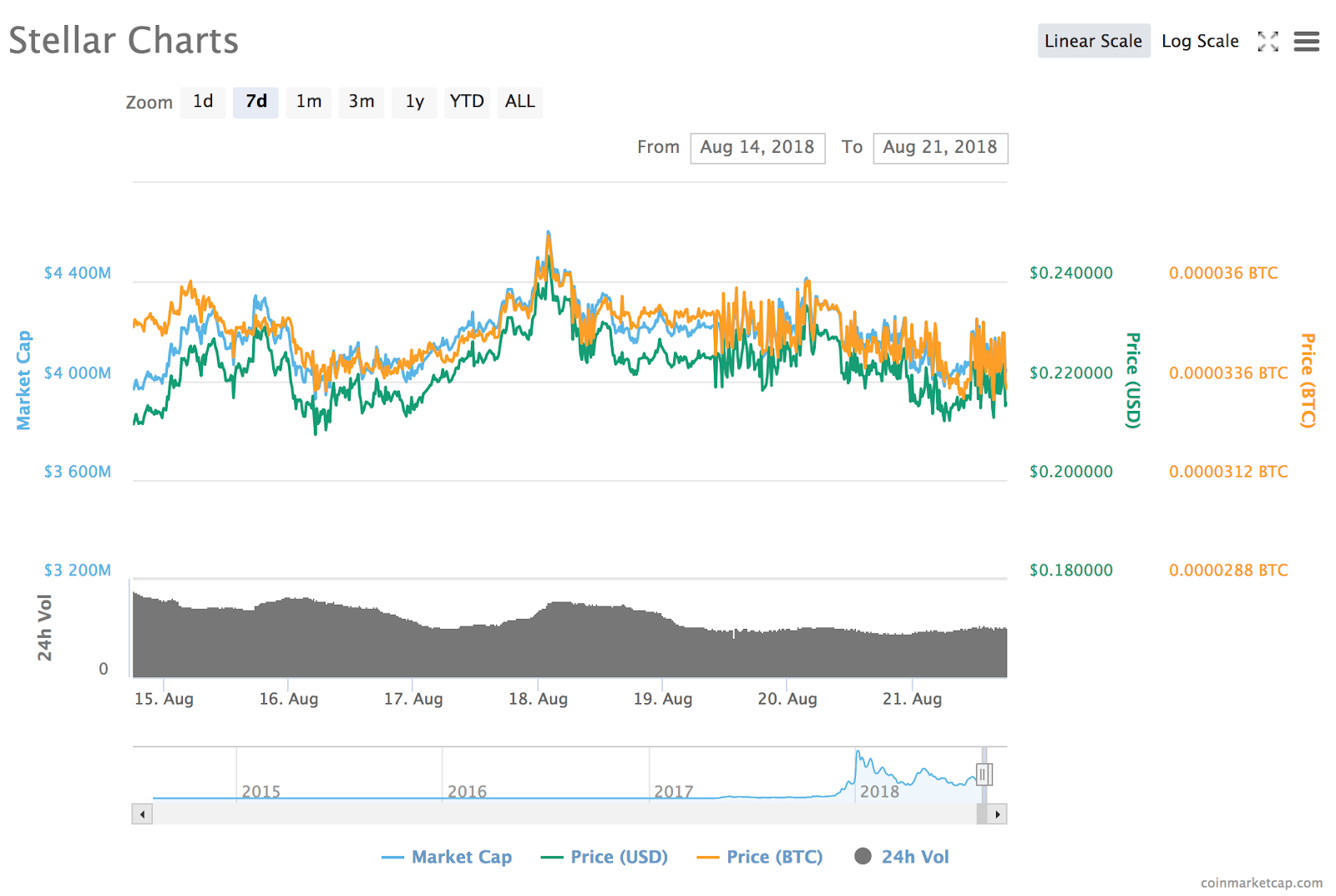 Total market capitalization of all cryptocurrencies is around $209.8 billion at press time, slightly up from an intraday low at $205.7 billion and comfortably above its squeeze to $191 billion a week ago: 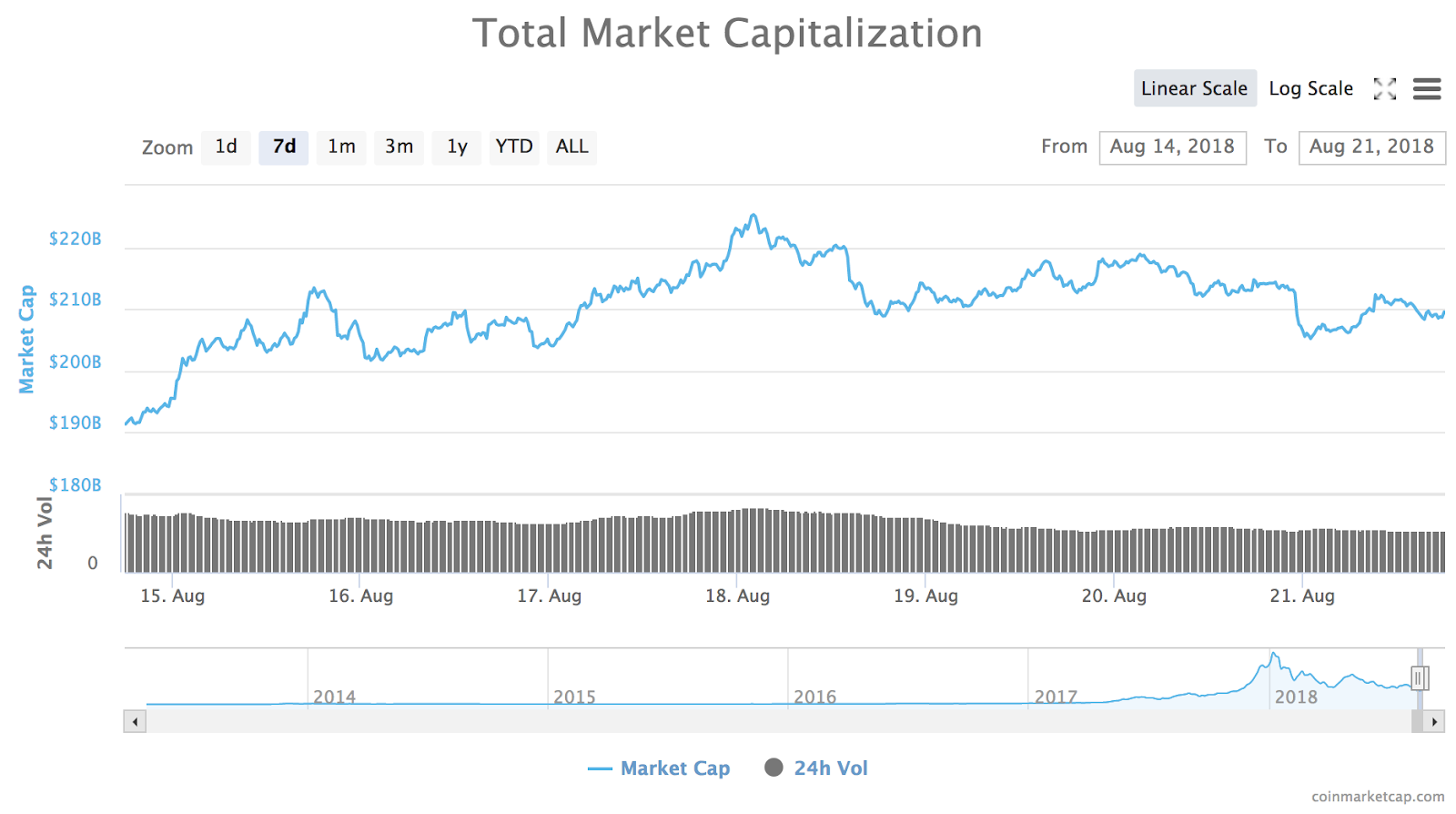 While the market continues to show strain, discussions are this week underway in South Korea to potentially reverse the country’s ban on initial coin offerings (ICOs). The parties involved are even reportedly keen to press ahead with the creation of South Korea’s own ‘Blockchain island’ that would vie with the blockchain-friendly trajectory adopted by Malta.

Meanwhile, fresh research has suggested that the volume of the global automotive blockchain market is set to reach $1.6 billion by 2026, based on a financial analysis of key market players including Ethereum (ETH), Ripple Labs Inc., IBM Corporation and R3.