Coming every Sunday, the Hodler’s Digest will help you to track every single important news story that happened this week. The best (and worst) quotes, adoption and regulation highlights, leading coins, predictions, and much more — a week on Cointelegraph in one link.

US Security And Exchange Commission Postpones Bitcoin ETF Until Fall

The U.S. Securities and Exchange Commission has delayed its decision on the listing and trading of a Bitcoin exchange traded fund (ETF) until September 30. The SEC is in the process of considering a rule change that would allow the fund, which is powered by investment firm VanEck and financial services company SolidX, to be listed on the CBOE BZX Equities Exchange.

According to this week’s article by the Wall Street Journal, cryptocurrency price manipulation is mainly conducted by organized “trading groups” that create “pump and dump” schemes on services like Telegram. According to the article, these groups can either create millions of dollars for themselves or be stung by the losses once all of the group dump a certain asset at the same time.

US DEA Agent: Ratio Of Criminal Activity To Legitimate BTC Transactions Has Flipped

U.S. Drug Enforcement Enforcement Administration agent Lilita Infante, who is a member of the Cyber Investigative Task Force, said this week that the number of illegitimate Bitcoin transactions has dropped to just ten percent of transactions. Infante added that she wanted people to keep using the blockchain, as it made them more easily identifiable.

U.S. coffee chain Starbucks will not be accepting Bitcoin as payment for Frappuccinos or other drinks after a week of misleading article titles implied the opposite. After last week’s announcement by the operator of the NYSE that they would be creating a new digital asset ecosystem with Starbucks as a partnered, a wave of news reports falsely represented that Starbucks would accept crypto for coffee, while really customers will rather be able to convert BTC into fiat which can then be used at Starbucks.

JPMorgan CEO Jamie Dimon said this week that Bitcoin is a “scam” and that he has “no interest” in it, while speaking at the Aspen Institute’s 25th Annual Summer Celebration Gala. According to Bloomberg, Dimon further “suggested governments may move to shut down the currencies [cryptocurrency], because of an inability to control them.” Dimon had told reporters last October that he wasn’t going to talk about Bitcoin anymore after a series of negative crypto comments in the fall.

“The potential for an [exchange-traded fund] is causing investors to decide that bitcoin is the best house in a tough market,” — Tom Lee, Fundstrat’s head of research

“The main thing to remember is that bitcoin is very early-stage venture, but has real-time price feed — and that’s a unique thing. People get excited about the price and overreact,” — Dan Morehead, CEO of Pantera Capital

A U.S. District Judge has refused to dismiss a suit against the husband and wife duo behind blockchain project Tezos, who are currently accused of violating U.S. Securities and Exchange Commission (SEC) regulations through the sale of unregistered securities in the U.S. Although the Tezos creators maintain their fundraiser took place in Switzerland, outside of U.S. jurisdicion, the judge has disagreed.

The largest bank in Australia, the Commonwealth Bank of Australia (CBA), has been mandated by the World Bank to arrange a bond issue entirely on a blockchain. The Blockchain Offered New Debt Instrument (bond-i) will be issued and distributed on a blockchain platform under the operation of the World Bank in Washington and CBA in Sydney. For now, the two organizations are using a private Ethereum blockchain, but the CBA noted it was open to alternatives.

A study conducted by independent rating agency ICORating has found that the Initial Coin Offering market has more than doubled in a year. According to the agency’s report, ICOs in 2018 have already raised over $11 billion in investments, a figure which it purports is ten times larger than the sum of investments from ICOs in Q1-2 2017.

Sources told Bloomberg this week that Goldman Sachs is planning to offer its clients custody for cryptocurrency funds, as the bank says that it remains “undecided” on its cryptocurrency plans. A spokesperson for the bank said that they are exploring “various digital products” in response to client interest.

Congressman Bob Goodlatte, a Republican representing Virginia, disclosed that he owns between $17,000 and $80,000 in cryptocurrency in what may be a first for a member of Congress to publicly report their crypto holdings. According to his release, the Congressman has principally invested in Bitcoin (BTC), with some holdings in major altcoins Ethereum (ETH) and Bitcoin Cash (BCH).

The Maerki Baumann private bank will become the second Swiss bank to accept cryptocurrency assets, citing the new market demands and the rise of cryptocurrencies’ popularity. The private Zurich bank has decided to accept crypto assets from payments received for services rendered, as well as those earned from crypto mining, but notes they are not ready to provide direct cryptocurrency investments.

The UK Financial Conduct Authority has announced the creation of a global initiative, made up of 11 financial authorities and related organizations, to work together in in order to help fintech firms interact more easily with regulators from different countries. The Global Financial Innovation Network (GFIN) aims to consult on topics such as the growth of technologies like distributed ledger tech and artificial intelligence (AI), as well as the regulation of securities and Initial Coin Offerings (ICO), among others.

IBM and Danish transport and logistics giant Maersk have launched their global blockchain-enabled shipping solution, made up of 94 organizations. The global supply chainplatform, TradeLens, has already captured 154 million shipping events, and its dataset is reportedly growing at a rate of close to one million shipping events a day. 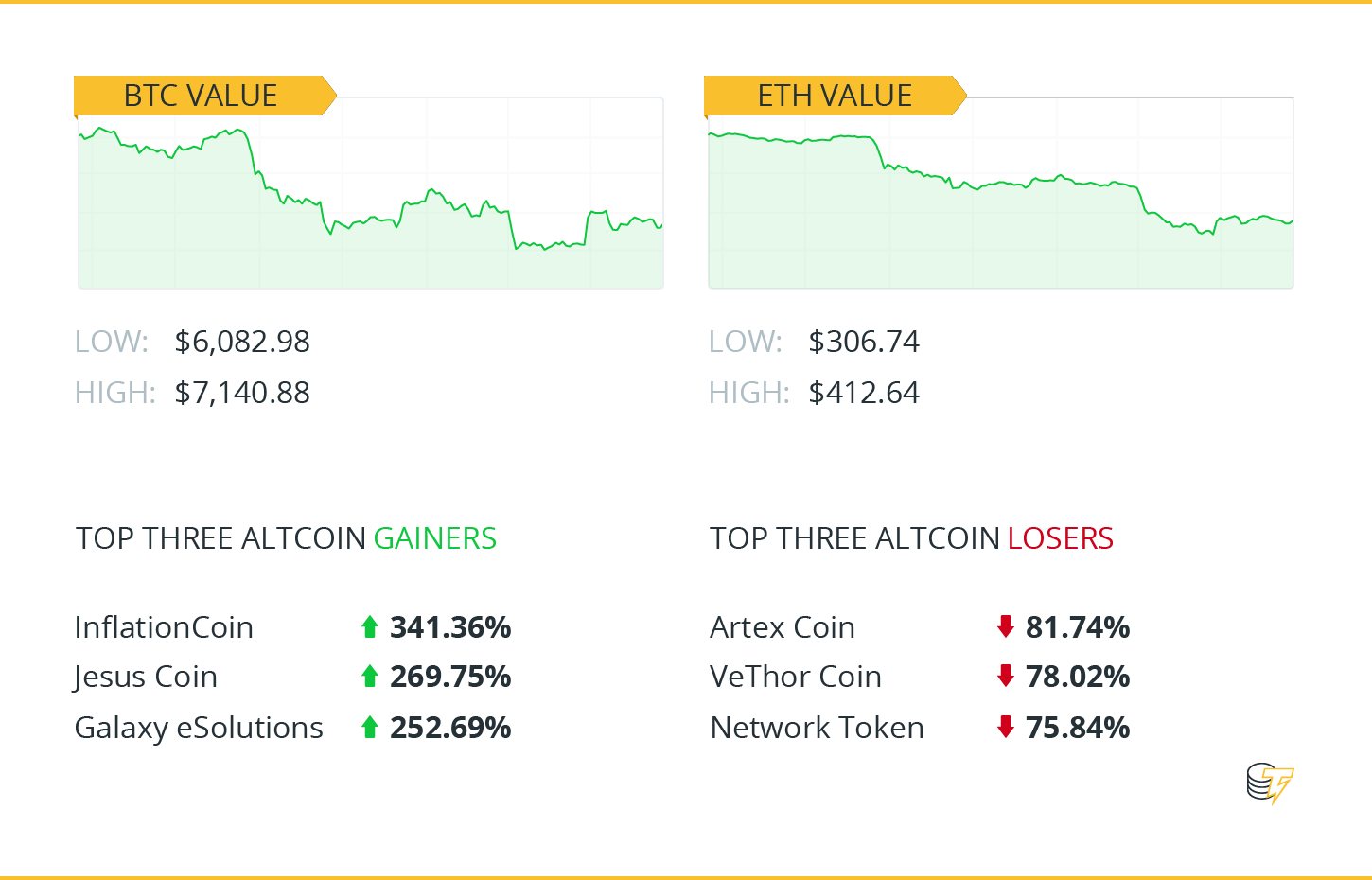 The crypto markets are still in the middle of their slump this week, with Bitcoin trading at around $6,583 and Ethereum at around $324 by press time. Total market cap is now at around $215 billion.

For more info on crypto prices, make sure to read Cointelegraph’s market analysis.

FUD Of The Week

Renaissance Macro Research’s head of technical research Jeff deGraaf concluded it may be “game over” for Bitcoin (BTC) in a new analysis if the cryptocurrency breaks its year-to-date support. In a note to clients, deGraaf, also claimed that Bitcoin’s price movements suggest the largest cryptocurrency is “permanently impaired.”

Tokyo-based security software manufacturer Trend Micro has found Bitcoin (BTC) ATM malware available for purchase from an “apparently established and respected” user on a darknet forum. For the price of $25,000, criminals could purchase Bitcoin ATM malware accompanied by a ready-to-use card with EMV and near-field communication (NFC) capabilities. The software exploits a BTC ATM vulnerability, allowing fraudsters to receive the BTC equivalent of up to 6,750 U.S. dollars, euros, or pounds.

An analysis of 88 million Twitter accounts has revealed more information on infamous phenomenon of cryptocurrency-related Twitter accounts advertising fake “giveaways,” finding a network of at least 15,000 scam bots. The researchers looked at the latest 200 tweets from each account, unearthing a mesh of 15,000 bots at work spreading fake competitions and impersonating some of the cryptocurrency industry’s best-known figures and businesses.

A Chinese Bitcoin trader has sued the crypto exchange OKCoin for reportedly not permitting him to withdraw Bitcoin Cash after the Bitcoin forked. A local news agency reported that this is the first legal action in China that involved last year’s fork of Bitcoin. According to the lawsuit, the crypto investor has accused the exchange of blocking him from receiving 38.748 BCH that he was due after Bitcoin’s August 2017 hard fork.

The U.K. Financial Conduct Authority (FCA) has warned investors about two so-called “clone” companies this week, i.e. companies that carry out business activities under the pretense that they are a firm registered by the FCA. One clone, Fair Oaks Crypto, allegedly aims to hoodwink potential scam victims by claiming that they represent Fair Oaks Capital. The other named rogue firm, Good Crypto, was giving out “false details or mix[ing] these with some correct details of the registered firm,” which in this case was London-based Arup Corporate Finance.

How to Lose $3 Billion of Bitcoin in India

Bloomberg takes its readers through a complex tale of cryptocurrency fraud, alleged extortion, kidnapping, and more involving a series of business partners, policeman, and even a former politician.

Blockchain: A Manifestation of the Borg?

A humorous comparison of how blockchain technology and the fictional alien race featured on the original Star Trek, the Borg, are actually quite similar due to their hive mentalities, strive for perfection, and ability to disrupt. In the author’s words: “The Borg’s catch phrase, ‘Resistance is Futile’, might as well be applied to blockchain.”

67 Thoughts to “You Can’t Actually Buy A Frappucino With Bitcoin, But You Can Ship More Things On Blockchain”