Coming every Sunday, the Hodler’s Digest will help you to track every single important news story that happened this week. The best (and worst) quotes, adoption and regulation highlights, leading coins, predictions, and much more — a week on Cointelegraph in one link.

The U.S. Securities and Exchange Commission (SEC) has again rejected Tyler and Cameron Winklevoss’ application for a Bitcoin exchange-traded fund (ETF). The first rejection came in February 2017, with the SEC citing the largely unregulated nature of the BTC markets. This time, the SEC noted in its rejection that the Winklevoss’ application did not demonstrate that their exchange would be able to prevent fraudulent and manipulative acts. However, the SEC Commissioner officially dissented to the rejection, arguing that the SEC’s decision erred on three grounds: it focused on the underlying Bitcoin market, not the derivatives, it will inhibit institutionalization of the Bitcoin market, and it shows a “skeptical view of innovation.”

Iran Plans To Create State-Issued Cryptocurrency To Circumvent US Sanctions

According to local media, the Iranian deputy for management and investment at the Directorate for Scientific and Technological Affairs has said that a plan for a working digital currency is already on the agenda. Although the technical details about the national cryptocurrency remain unknown, the deputy noted that the currency could “help us at the time of sanctions.”

The former vice president of North American investment banking at JPMorgan Chase said this week that blockchain “may be the key to avoiding the next global financial crisis.” Pang Huadong noted that although the technology is still in its nascency, its development prospect are “limitless,” underlining its transparency’s potential to establish trust mechanisms “at the lowest cost.”

Sergey Solonin, the CEO of Russian payment services provider Qiwi, claimed this week that a former programmer at the company used its payment terminals to mine around 500,000 Bitcoin back in 2011. Qiwi apparently noticed the covert mining operation when electricity usage increased in the terminals at night. According to Solonin, the programmer refused to give up the Bitcoin (worth about $5 million then and $4 billion today) and quit the company. Apparently, the Bitcoin have all since been “lost.”

The latest incarnation of Fortune’s “40 Under 40,” a list of the most impressive young disruptors in global business, includes five persons from crypto and blockchain-related fields. Ethereum co-founder Vitalik Buterin made the list for the third time, and Coinbase CEO Brian Armstrong for the second. Also noted are Russian Telegram co-founder Pavel Durov — which raised a combined $1.7 billion in two ICOs this year — and the co-founders of payment trading app Robinhood — which added a crypto trading option this year — Vlad Tenev and Baiji Bhatt. Fortune also released, for the first time ever, a crypto-focused “40 Under 40.”

“We’re looking for those companies who are building the robust but very unsexy infrastructure that’s probably not going to make a headline anytime soon,” — Alexis Ohanian, a co-founder of Reddit and VC firm Initialized Capital, on what he looks for in investments

“So when you look at our portfolio — diamonds, jewelry, watches, wine, collected automotive cars, maybe even helicopters — I guess it’s motivated by me, the things I like to eat, to drink, to fly, to wear — handbags — selfishly, why not be motivated by that?” — Leanne Kemp, founder of Everledger, on which high class assets the blockchain platform tracks

The U.S. Securities and Exchange Commission (SEC) has postponed its decision on investment firm Direxion’s Bitcoin exchange-traded fund (ETF) application until September 21, in a move that only affects Direxion’s offering. The SEC said it was “appropriate” to delay its review in order to have “sufficient time to consider this proposed rule change.”

Phil Anderson, the Libertarian candidate for Wisconsin governor, will accept Bitcoin donations despite the state’s Ethics Commission previously finding them a “serious challenge” to compliance with state law. Anderson believes his party is abiding by the law in accepting BTC, and said he will “push all the way back” if the Ethics Commission files a complaint.

The Securities Divisioon of the office of the Attorney General of South Carolina has removed the cease-and-desist orders against shipping platform ShipChain and cloud mining platform Genesis Mining. ShipChain has received the cease-and-desist, which it had refuted, in May for allegedly violating the state’s securities laws. Genesis Mining was also previously halted for reportedly selling “unlicensed securities.”

South Korea’s Financial Services Commission has asked lawmakers to move quickly in their approval of the country’s first cryptocurrency bill. Hong Seong-ki, the head of the regulator’s virtual currency response team, warned of the security and money laundering risks associated with South Korean crypto exchanges in a statement, underlining that the bill should be passed “as soon as possible.”

Nasdaq, Inc. held a closed-door meeting this week to discuss steps for making the cryptocurrency industry more legitimate in global markets. Nasdaq confirmed that the event took place, and the discussion was reportedly attended by around half a dozen representatives from both crypto and traditional financial firms — supposedly including the Winklevoss twins’ Gemini. An unnamed source told Bloomberg that this was just the beginning of such discussions.

A new study, commissioned by the European Parliament Committee on Economic and Monetary Affairs (ECON), has found that central bank-issued digital currencies could be a “remedy” for a lack of competition policy in the crypto sector. The study also refers to Bitcoin and blockchain as “sources of disruption” for the monetary policy and financial stability.

Bitwise has filed with the U.S. Securities and Exchange Commmission to launch a cryptocurrency exchange-traded fund this week. According to Bitwise, their HOLD10 Cryptocurrency Index will include 10 cryptocurrencies and will track the Bitwise HOLD 10 Private Index Fund founded in November of last year.

The state-owened KT corporation, South Korea’s largest telephone company, has announced the launch of its blockchain-powered commercial network. According to the KT Corporation, they have built a blockchain layer on top of its existing nationwide network to improve its security and transparency. KT Corporation also plans to offer blockchain-basedroaming services with some international mobile carriers.

The Fusang Investment Office, which focuses on family officies, announced plans to launch a crypto-custody service in Hong Kong. According to the company’s CEO Henrgy Chong, the Fusang Vault will hold digital assets for clients as well as provide periodic audits. Chong noted that there is an increasing need for an independent third paty for holding a clients’ crypto assets.

Google announced this week that it has partnered with Digital Asset and BlockApps in order to offer distributed ledger solutions on Google’s Cloud Platform. In their statement, Google said that customers will also be able to test out open-source integrations for the Hyperledger Fabric and Ethereum protocol on their Google Cloud Platform Marketplace Service.

Singapore Airlines has launched its own loyalty digital wallet based on blockchain technology, co-developed by Microsoft and KPMG Digital Village. The new wallet, called “KrisPay,” converts frequent flyer miles into digitized “KrisPay” miles that customers can use to pay for retail purposes via a mobile app.

China’s Xiongan New Area government has brought blockchain software tech company ConsenSys on board to help develop blockchain tech applications in their future “smart city,” according to a recently signed Memorandum of Understanding. ConsenSys has confirmed that they will advise the Xiongan government on blockchain and software solutions in order to establish it as a “next generation smart city [and] leading blockchain innovation hub.”

The Indian state of Telangana has announced it will sign several memoranda of understanding with blockchain firms in order to bring the technology to state applications. According to a government official, introducing blockchain will help bring more transparency and efficiency to public services.

The venture capital arm of General Electric, GE Ventures, has participated in a $12 million Series A funding round for blockchain startup Xage Security. The funding round, led by March Capital Partners with City Light Capital and NexStart Partners also as participants, aims to develop Xage Security’s security fabric for industries ranging from energy to building management.

Mike Novogratz’s crypto-focused merchant bank, Galaxy Digital, has led a $52.5 million dollar funding round for the crypto lending firm BlockFI. BlockFi offers corporate and retail loans on Bitcoin and Ethereum, and hopes to expand their services to support both more cryptocurrencies and more geographic markets in the future. 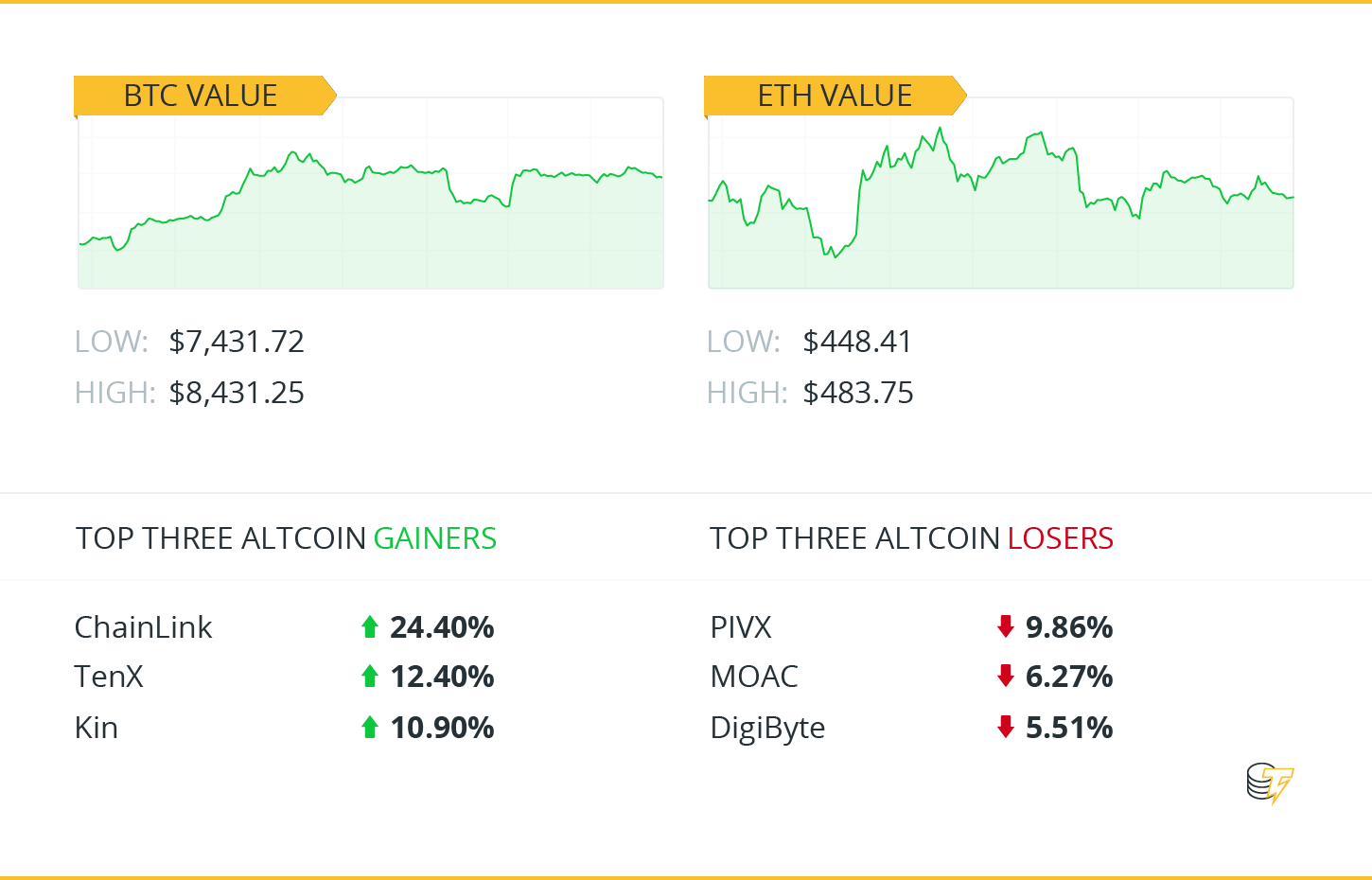 For more info on crypto prices, make sure to read Cointelegraph’s market analysis.

FUD Of The Week

Jon Montroll, the operator of Bitcoin stock exchange BitFunder, has plead guilty to federal charges of obstruction of justice and securities fraud this week. Montroll is charged with providing false balance statements to the U.S. Securities and Exchange in an investigation of the fake 6,000 BTC BitFunder hack in 2013.

Unocoin, an Indian crypto wallet provider and exchange, has suspended rupee deposits and withdrawals “as per orders” from the country’s central bank. The exchange notes that the suspension is temporary until “an alternative method of funding is identified and deployed.” RBI’s crypto dealings ban came into effect on July 5, and a hearing about its legality has been moved to September 2018.

Delaware Department Of Justice Asks Poloniex Users If They Have “Issues”

The Investor Protection Unit of the Delaware Department of Justice wrote an email to a list of individuals this week, asking him to contact them if they were having any issues with their Poloniex account. The Poloniex crypto exchange has recently been the subject of complaints online, with users writing on Reddit about their missing or “stuck” deposits.

MetaMask, a browser extension for interacting with the Ethereum network, was pulled from the Google Chrome Web Store for five hours this week before being listed again. The company tweeted that it was “unsure” of the reasons for the delisting. During the time the app was removed, Ethereum-based prediction market protocol Augur tweeted a warning that there was a fake, phishing application now present on Google Chrome’s store posing as the MetaMask extension.

“Assassination markets” have popped up on Augur — a blockchain-based platform that uses Ethereum for event betting — consisting of users betting on whether certain public figures will die. Users have recently begun posting bets on the deaths of various public figures, including U.S. president Donald Trump and Berkshire Hathaway CEO Warren Buffett. Hypothetically, should the wager become high enough, it could create an incentive for someone to carry out the crime.

Prediction Of The Week

Alexis Ohanian, both a co-founder of Reddit and the VC firm Initialized Capital, has upheld his previous forecasts of BTC hitting $20,000 and ETH hitting $1,500 in 2018. Ohanian described Bitcoin as a “robust” asset, noting that blockchain development has helped BTC stay up even with its volatility.

Graduating out of Skeuomorphism

This article delves into the reason behind why Bitcoin became associated with an image of a gold coin with a “B” on it in the first place — an “interesting design concept” called skeuomorphism. The concept entails the association of digital concepts with forms that resemble their physical counterparts, like an online “shopping cart” that isn’t really a shopping cart at all. The article posits the question of how Bitcoin would have developed if it had been marketed as the alternative to Western Union, instead of its initial perception as a coin or investment vehicle.

Meltem Demirors, the CSO at CoinShares and a lecturer on blockchain at Oxford, explores the possibilities of the Tezos ecosystem in an exhaustive article that includes a specialized Tezos jargon dictionary, a graphics-heavy breakdown of tezzies delegations, and speculations about the potential for “token holder activism.” Demirors notes the token holder activism can be used for both good and bad, advising her readers to “remember that blockchains don’t change human nature.”